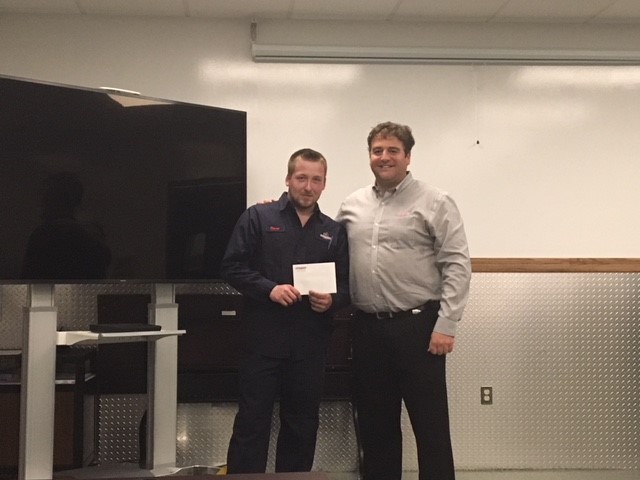 MEADVILLE, PA (May 4, 2018) – Today Channellock, Inc. announced the winner of its first quarterly “American Grit – Won’t Quit” Award for exceptional dedication, follow-through, extra effort, attitude and hard work. Steve Reilly, a Forge Shop Utility Worker, who has worked for Channellock less than a year, won the very first award from the company. He was presented with the award by Channellock President Jon DeArment.

“The American-Grit – Won’t Quit Award was implemented as a way to recognize those associates who really do go above and beyond their daily job duties,” said Marc Johnston, Channellock Director of Workforce Development. “Our first winner, Steve Reilly, daily displays a work ethic, commitment, drive and desire to be successful in the workplace. Congratulations and thank you to Steve and all our nominees.”

Reilly was nominated for the award by his supervisor, Kelly Carr, who said, “Steve always seems to be on top of things in the Forge Shop, he is willing to help out when and where help is needed, and he makes sure to inform supervision when something is out of the norm. He is known for being positive and respectful to everyone, and always willing to offer an extra hand. When Steve noticed that there was a lot of work for the restrike team, he offered to help so they wouldn’t have to pull someone from forging to go down there. He certainly has shown all of his co-workers what type of a worker and person he is.”