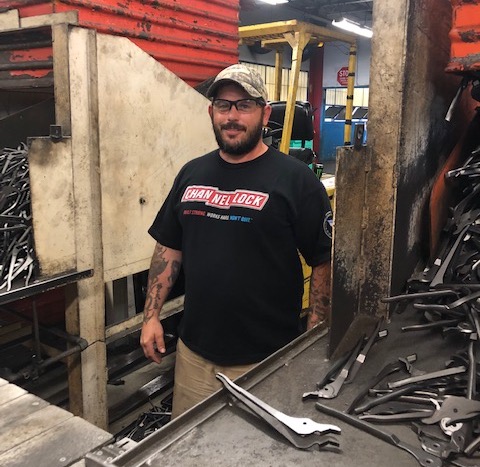 MEADVILLE, Pa. (AUGUST 12, 2019)– Roy Leap received the 16th annual Falcon Award from CHANNELLOCK® after being nominated by his peers for going above and beyond to make the company and community a better place. The Falcon Award annually recognizes one CHANNELLOCK® associate who consistently practices strong decision-making skills and efficient work habits, especially in an effort to make the company a safer and more productive work environment.

“This award showcases our associates that embrace the efficiency and vision of a falcon in order to move CHANNELLOCK® into our bright and exciting future,” said Jon DeArment, president and chief operating officer at Channellock, Inc. “It's an honor to recognize this year's Falcon award winner, Roy Leap, who has demonstrated to his coworkers his commitment to Channellock and his community. Without hardworking team members like Roy, we wouldn’t be here today. We’re also thankful for and want to congratulate all of this year’s nominees.”

Leap is a T&G Finishing Cell Operator and has been working with CHANNELLOCK® since 2018. His commitment to positivity, learning, and productivity are only a few of the many reasons why the company chose to honor him this year.

“Roy leads his team on a daily basis and connects to his coworkers on a personal level,” wrote one employee who nominated him for the award. “If someone is struggling at their position or if distractions outside of the workplace are weighing heavy on someone, he will go out of his way to help them with sincere friendship and timely advice.”

Leap was given the Falcon Award during the CHANNELLOCK® 133rd Anniversary celebration and picnic at Waldameer Park on Saturday, August 10th. He is also a past winner of the CHANNELLOCK® American Grit – Won’t Quit Award for his exceptional dedication, follow-through, extra effort, attitude and hard work.